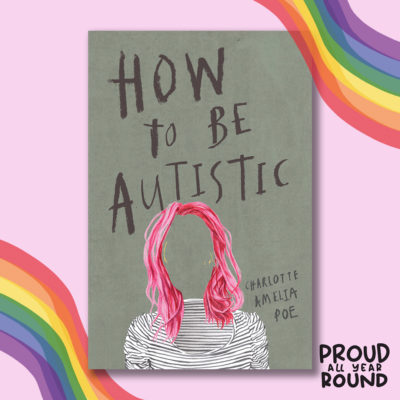 This week our Book Sales and Promotions Co-ordinator Alex Thornber caught up with Charlotte Amelia Poe to discuss their award winning memoir How To be Autistic.

AT: Good Morning, and Happy Pride! How are you?

AT: I thought it would be fun to revisit How to be Autistic and was wondering where the first seeds of that project came from?

CAP: Pretty much as soon as I got home from winning the Spectrum Art Prize, I started writing How To Be Autistic. I really wanted to expand on the ideas the video had, and I felt like I finally had an opportunity to speak about my experiences and share a perspective I hadn’t found before. It was a kind of manic, mad dash to the finish line, and I never expected anything to come of it.

AT: Your voice in the book is so clear and so open, it reads like having a conversation, was that a conscious choice for this project?

CAP: I think part of writing it quickly, and with only a sentence as a plan for each chapter, I think it just made it really honest and a little rough around the edges. I’ve spent my entire online life writing about what I’ve been going through in blogs, talking in vlogs, making graphics – generally just having a conversation with anyone who was willing to listen, and How To Be Autistic was a genuine extension of that. So I don’t know how much of it was a conscious choice, as opposed to what I was used to doing.

AT: Putting yourself, and your inner life, out into the world like your book does must be a daunting experience. How has the books reception been for you?

CAP: Honestly it’s a little bit terrifying. I haven’t read it since I finished it, and it’s sort of this sort of secret locked away thing that I have to accept is out in the world, but I have to separate myself from or I think I’d go mad. I’ve basically given the world all the weapons they need to hurt me. Thankfully, people have been kind, and very understanding, and instead of using it to harm, people have used empathy and reached out to say “hey, I relate to this”, which is hard to read sometimes, because when I wrote it I was half hoping nobody would relate to it, that things would have changed enough that it was irrelevant, but at least it has helped people feel less alone in some way. Which is neat.

AT: What has been the most rewarding part of the process for you?

CAP: Definitely the messages and emails I get from people who have read it. I’m terrible at replying, I never know what to say – I immediately forget how to hold a human conversation, but I read every single one even if I don’t reply and it means so, so much to me. That there are dozens (literally!) of people who have been diagnosed as a result of something I’ve done, that’s amazing. That there are people who understand themselves or a loved one better as a result – that’s just so cool. I think we reach for books to try to understand ourselves, I know I do, and the fact that people found that understanding, I don’t even know what to do with that, except to say thank you for taking a chance on a very strange book.

AT: Are you working on anything at the moment?

CAP: My second book, The Language Of Dead Flowers, my first novel, is coming out at the end of September, preorders open really soon (beginning of July!) and I’ll get to share the absolutely beautiful cover I was lucky enough to have my friend, Tylar, work on, soon. It’s about a nonbinary tattoo artist who just happens to be a necromancer in a world where necromancy is forbidden. I’m absolutely in love with all the characters and I’ve fought really hard for this book to exist, and I’m really excited for other people to read about Tao and Adam and their lives.

AT: If you could recommend one book for people to read this pride month, what would it be?

CAP: That’s so hard! I think, just because it’s one of my all time favourite books and I absolutely devoured it when I read it, it has to be Radio Silence by Alice Oseman. It uses multimedia elements to tell more than one story at once, which I always love to read, and Aled and Frances are both absolutely amazing characters, and honestly having Aled as ace representation (and I headcanon him as nonbinary, to be honest, though I don’t know if he was written to be or not) and Frances as bi representation is really awesome. It’s just a great story and I return to it over and over again.

How To Be Autistic is available now at all good bookshops and at Ethical Shop.