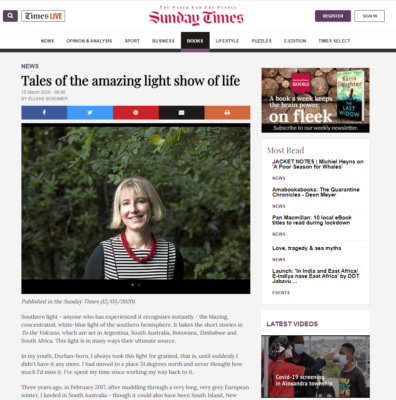 ‘DH Lawrence talked about the “unspeakable beauty” of this light over the sea in Sydney. Katherine Mansfield admired its silver sheen on the waves in Wellington harbour. Many of us have watched it shimmer across the Karoo, as does the ex-combatant character in my story “Blue Eyes”. Some, like the group of people in the title story “To the Volcano” are so drenched in it they fall crazily in love. Or see their love in a completely new and shocking light, as in “The Biographer and the Wife”.

All of the characters in To the Volcano took on a distinct and definite shape as if standing under this light, bathed in it, even the titular “Evelina”, who (to confess) I first borrowed from James Joyce but then gave a home in Buenos Aires.

And this is not even to begin to speak of the light that is southern starlight, which simply is brighter than the starlight of the northern hemisphere. Fact. The South Pole is oriented to the centre of our galaxy, the Milky Way, and some of the stars like Alpha Centauri are also actually closer by.’