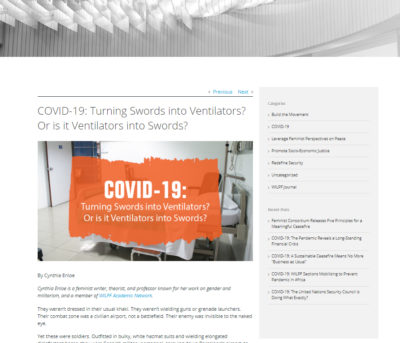 ‘They weren’t dressed in their usual khaki. They weren’t wielding guns or grenade launchers. Their combat zone was a civilian airport, not a battlefield. Their enemy was invisible to the naked eye.

Yet these were soldiers. Outfitted in bulky, white hazmat suits and wielding elongated disinfectant hoses, they were Spanish military personnel, spraying down Barcelona’s airport, to protect members of the public from coronavirus infection.

For a critic of militarism, is this a reassuring sight?

This is not a new quandary. Those resisting militarization have tussled with this puzzle before. In the wake of the tsunami, Japanese feminists pondered the implications of the Japanese Self-Defense Force being deployed to clean up the Fukushima region after the terrifying nuclear reactor meltdown. Chilean and Turkish feminists have debated the post-disaster consequences of their states’ militaries taking on the roles of first responders in the aftermaths of devastating earthquakes. While most Americans seem to have taken pride in their soldiers being sent to Thailand and the Philippines to aid in natural disaster relief efforts, many American feminists remained skeptical.’

Professor, feminist and theorist Cynthia Enloe writes about the harm done by using the military in disaster relief. Read the article in full on the WILPF website.