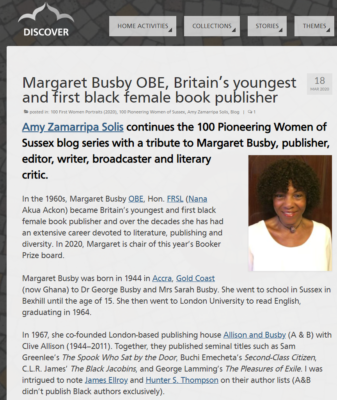 ‘In the 1990s, she edited the ground-breaking anthology Daughters of Africa (Jonathan Cape, 1992) and its 2019 follow-up New Daughters of Africa, published by Myriad Editions, who has an office in Brighton. The 2019 anthology has been nominated for NAACP Awards for Outstanding Literary Work 2020 and a Lifetime Achievement in African Literature by Africa Writes in 2019. Each anthology compiles more than 200 women from Africa and the African diaspora.

The title references a call to action from first African-American public speaker Maria W Stewart, who said in 1831:

‘O, ye daughters of Africa, awake! awake! arise! no longer sleep nor slumber, but distinguish yourselves. Show forth to the world that ye are endowed with noble and exalted faculties.’’

Amy is one of the creative team behind Writing our Legacy, raising awareness of the contributions of Black and Ethnic Minority (BME) writers, poets, playwrights and authors born, living or connected to Sussex and the South East.