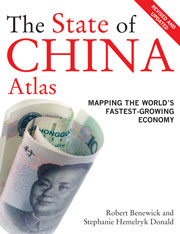 The new edition of this striking atlas charts the profound changes taking place within China as well as their implications for the world at large.

China is the world’s fastest-growing economy, and a major trading nation. With its entrepreneurial outlook and population of 1.3 billion, it offers unique opportunities for domestic and overseas investors.

The atlas maps a country of marked disparities – between urban and rural, east and west, rich and poor. The topics covered range from China’s position and influence in the world to the structure of the communist party-state, and the power and influence of its leaders. It addresses the environmental problems caused by China’s rapid development, and reveals the huge disparity in educational and economic and opportunities, diet and healthcare experienced by its people – not only those in different areas of the country, but between rural and urban near-neighbours.

Colorful, attention-grabbing graphics along with solid data and information [which] should find a wide audience...handy for up-to-date information on a wide variety of topics...keep a copy on a close-by bookshelf.

A book to savour.

I’m a devotee of this series. The new edition of The State of China Atlas is wonderful. The graphics are incredibly effective at conveying critical information. Anyone curious about China would benefit from spending time reading the atlas and discovering the great variation in conditions, opportunities, and norms across China. I’ll be showing it to audiences for a long time to come ... absolutely invaluable.

It is still difficult to get reliable hard data from China. The State of China Atlas fills a vital gap, ranging from population, economic growth and political leadership through to social and environmental development.

A great visual introduction to the diversity of China.

The State of China Atlas is simply indispensable for teaching. It is clear, comprehensive, and focused on the most crucial issues facing the country. It has provoked some of the best discussions we have had in class.