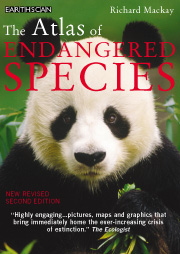 With 20 percent of these species facing extinction by 2030, this atlas traces those lost already as well as others threatened and surviving today.

It catalogues the inhabitants of different ecosystems, including forests, mangroves and coral reefs, and examines the major threats to biodiversity – from loss of habitat to hunting – as well as the steps being taken towards conservation.

A compact, clear and informative book that should have a place on the bookshelf of all readers interested in nature conservation.

Quite simply, every school and institution library should get a copy.

A must for budding botanists and ecologists.

A pleasure to read...fantastic use of colour and photography.

The first fully-illustrated and comprehensive guide to the world's endangered plants and animals.

Highly engaging...pictures, maps and graphics that bring immediately home the ever increasing crisis of extinction.