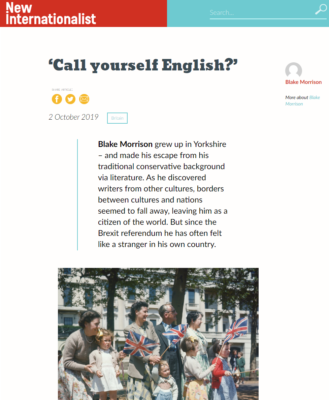 ‘‘Call yourself  English?’ Yes and no. It’s the country to which I’m most attached, but at some point I dropped ‘English’ for the more inclusive ‘British’. Now it too is tainted, through adoption by the Far Right. I’d not go so far as to call myself Irish, though I do now have an Irish passport. I’m tempted to call myself ‘European’ but that only invites the response ‘Where in Europe?’ It’s natural to wonder where people come from but to ask is a loaded question. There are people living in the UK who fear they’ll be discriminated against if they admit to having begun life elsewhere, just as there are countries where – because of Empire, or complicity with the US, or bombs that have been dropped – it pays not to say you’re British.’