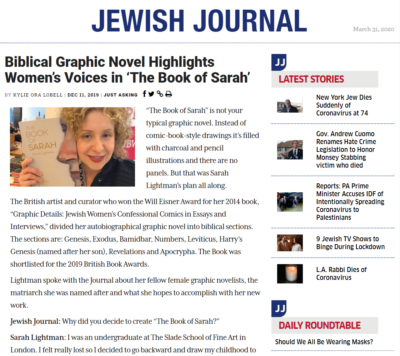 Do you think Sarah was overlooked in the Bible, since there wasn’t a book about her?

SL: That’s what I argue. I felt about her story what I felt about myself — I wasn’t leading my own life. I was in someone else’s story. Like me, she was also an older mum. There’s contemporary literature written with her in mind. I found more as time went on. Once a lot of the biblical women began to become independent in the narrative, they were condemned and then ignored. Eve was condemned for wanting to learn more.

With Sarah, she gets absorbed into Abraham’s great narrative. She’s a conduit through which the Jewish people are born. It’s Abraham who learns her name is going to be changed. It’s Abraham who converses with God. Sarah is deriving power through Abraham. Even when she talks about her baby, she says, “Who believes Abraham could have a baby at this age?” She’s often qualified in relation to the male characters. Sarah has power in my graphic novel. Women can take control of how other women are being presented in the arts and give them power and opportunity.