One of the pleasures of an illustrated book is the initial flick through, the guilty quick peek it’s impossible not to take in advance. Doing so here, many of the images may beguile and reassure us. Reproductions of line drawings of birds, with an elusiveness, a feathery softness that touches fleetingly.

The first glimpse – this initial flick – hints, perhaps, at species identification – reassures us that An English Guide to Birdwatching actually is a book for the birdwatcher. And it is. But it is also a labyrinth that gently undoes my thinking of what birdwatching is. 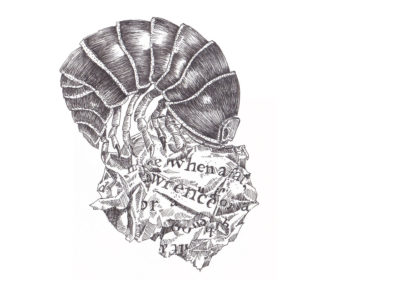 The very first illustration instead shows a woodlouse, embracing and eating fragments of printed text.

Then the surprise of the first bird. A blackbird. Almost in profile, it stares you down, its trumpeting beak a brilliant visualisation of sound. 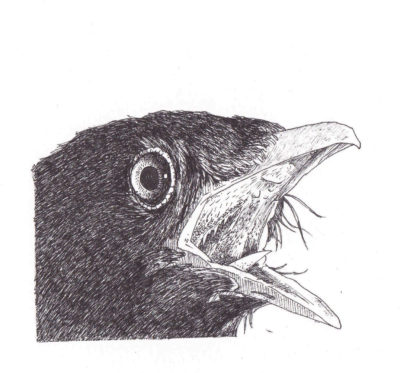 I hear a call, a territorial challenge (all the while in the text, a didactic Marxist historicist public intellectual, Stephen Osmer, hilariously expounds on his ‘deep-rooted dislike of wordplay’). This image is not the illustration we might expect from a regular guide to birdwatching. In such guides, from Thomas Bewick to the Observer Book of Birds, we expect to find the whole body of a bird, with a reassuring caption, and – crucially – a margin that frames and reduces the creature – not a living singing cawing head bled into the edge of the page.

Comically, this is a novel about not seeing (I think). At one point one of the migratory narrators comments, with emphasizing italics: ‘even if we were talking about blinds (and I have to remind you, we are not)’. The narrator is describing ‘a hut in which to observe birds’, establishing the distinction between the English term hide, and the American, blind. A blind illustration. 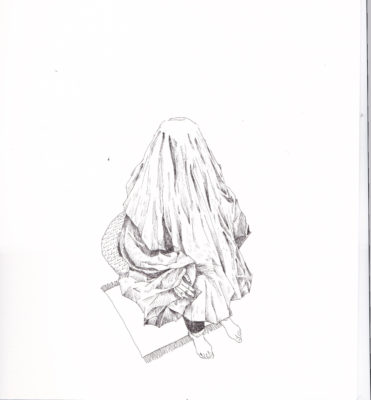 Another narrator (who might be a he, a she or a bird) asks, describing a pop-up, American, commercial hide called a ‘photo blind’ : ‘How can anyone live with the term “photo blind” and not go completely c-c-c-r-r-a-a-a-a-a-z-y?’ We might think we know what birdwatching is, that we can just go and do it, or at least sit and read about it. Do we? Who’s watching? Who’s being watched? 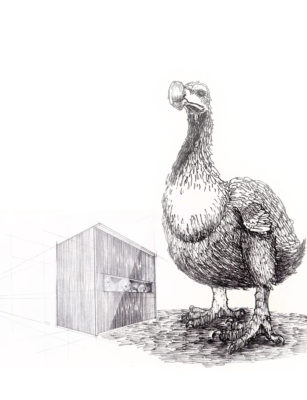 Not many contemporary novels are illustrated like this one. I’m thinking here not of the decidedly visual novels that do abound (from Sebald to the graphic novel) but a gentler sort of dropped in illustration, an apparently casual, extra gift, like the handful of illustrations that used to appear in novels for adults in the 19th-century, but that today we’re meant to have grown out of.

One other that springs to mind is John Berger’s From A to X, an epistolary love story that haunts an abandoned prison. In it, Berger’s images of hands emphasis the materiality of writing. For me the illustrations by Natalia Gasson in Royle’s novel share a lot with Berger’s. Linear vignettes, they participate in the text, with no apparent differentiation in type of ink or texture of paper.

The gorgeous textures of the birds conjure the idea of touch 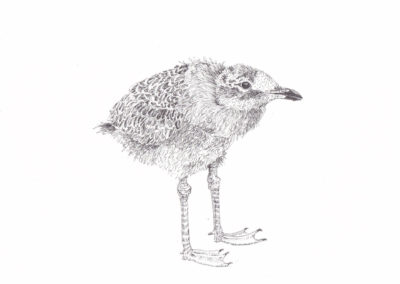 . Whether caressing or violent. In both Berger’s and Royle’s novels, the illustrations juggle texture, touch and blindness.

Living in or around Brighton, we all have face-offs with gulls – you can’t get very far if you’re not willing to stand up and fight for your chips. Or you might have one of those heart-stopping moments, gulled by a cry that sounds like a child in the greatest distress. If you’ve ever been curious about the Icarus-like life of gulls, this is the novel for you. 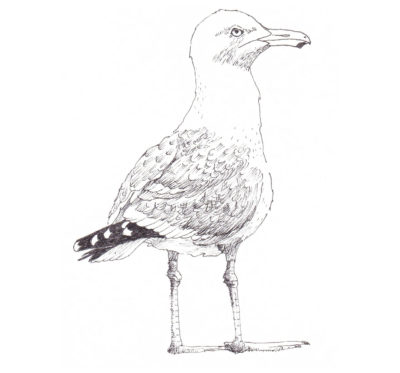 Or there’s the woodcock, that eats woodlice – and this brings in the novel’s gripping central struggle between a character called Nicholas Royle – who gets called a woodlouse – and Silas Woodlock – who gets called woodcock. One is a literary critic; the other an undertaker; their relationship is one of violence, literary theft, telepathy and mysteriously mingled identities. The woodlouse and woodcock are both writers, and one thing that starts to emerge for me is that this book is about watching writing as well as birds. Birds watch us, watch us write, write us. 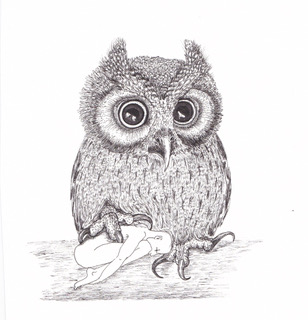