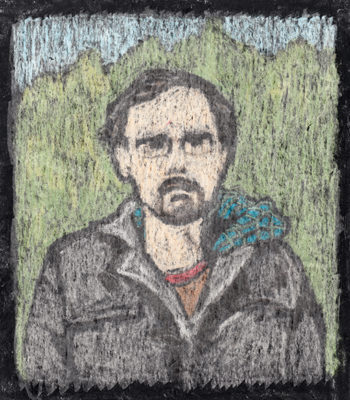 Myriad and GOSH Comics invite you to join Gareth Brookes and friends to celebrate the launch of his new graphic novel, A Thousand Coloured Castles, on Thursday 20 April 2017 7–9pm at 1 Berwick Street, Soho.

Gareth, who famously used embroidery and lino-cutting to create his prize-winning debut The Black Project, has risen to the challenge of invention and adopted his own, brilliant, crayon ‘scratchback’ technique for A Thousand Coloured Castles. The result is a glorious vision of an elderly couple struggling with unreliable eyesight and marital deafness, a captive wild child, ladder-hatted solders marching down streets and crenellations disappearing above suburban roof-tops.

In advance praise for A Thousand Coloured Castles, Mark Wallinger writes: ‘A beautiful book… The way the drawings can move and coalesce from the mundane and everyday to the fantastical and unaccountable makes the hallucinatory experiences palpable and disturbing.’ Dr Dominic ffytche describes Myriam’s particular form of macular degeneration as ‘masterfully depicted’. And Hannah Berry couldn’t put it any better: ‘Gareth Brookes has an uncanny ability to locate the sinister root of the suburban and familiar and twang it mercilessly.’

There will be drinks and the chance to buy the first available copies of the book, signed by Gareth, a week ahead of publication.

Everyone welcome. If you are unable to join us for the event, you can preorder your copy of A Thousand Coloured Castles here.