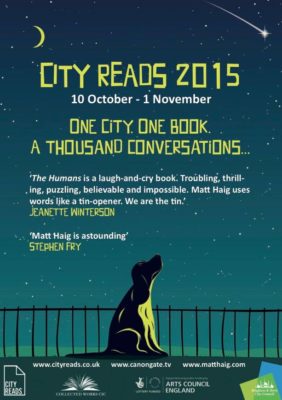 One stage, twenty writers, three minutes each… Join us to hear some incredible voices from the vibrant Brighton literary scene on what it means to be human.

Tickets are £7 (£5 concessions). There will be a bar, cabaret style seating and bookstall featuring books by all of the contributing authors.

City Reads runs from 10 October to 1 November and features a host of events around Brighton in celebration of this year’s book, The Humans by Matt Haig.

2015 marks the 10th anniversary of City Reads and makes it the longest running ‘big read’ in the UK. Delivered by award winning literary organisation Collected Works CIC, the CITY READS festival is an annual ‘big read’ conceived to spread a love of books and ideas to the widest possible audience throughout Brighton & Hove, with a healthy reach into the South East region.

Artistic Director, Sarah Hutchings explains how proud she is that City Reads has such a special book to help celebrate its 10th birthday: ‘It all started in 2005, with Alice in Wonderland. I was working at Brighton Festival as a literature programmer and was approached by Penguin Books who asked me if I thought a ‘big read’ would work in Brighton. I said ‘yes’ without hesitation and City Reads was born… I was taken aback at how quickly and enthusiastically Brighton & Hove took to the idea. This year’s choice is a life changer; The Humans is funny, sad and profound – the City is going to love it.’