Ian Williams, author of The Bad Doctor and The Lady Doctor will be entertaining festival-goers at Green Man 2019.

Ian Williams is an award-winning comics artist, doctor and writer, now living in Brighton. He grew up in the north of England and studied Medicine in Cardiff before moving to North Wales, where he lived for over twenty years, having studied Medicine, Medical Humanities and Fine Art.

Ian worked as a doctor while developing a side career as a painter and printmaker, exhibiting nationally and internationally. He founded the website GraphicMedicine. org, coining the term now applied to the interaction between comics and healthcare.

He created Sick Notes, a series of comic strips for The Guardian and is joint Series Editor for the Graphic Medicine list by Penn State University Press.

Ian is truly hilarious and the gig will be a highlight of the festival – don’t bother watching any of the music, just spend your whole time in the literature tent. He will also be DJing on Green Man Radio—’The Bad Doctor’s Hospital Radio Show’.

Tickets to the festival are now sadly sold out but if you can find someone who has tickets but somehow fallen very ill with a serious cold then you could claim them far too poorly to go, snatch the tickets and have a glorious time in their place! 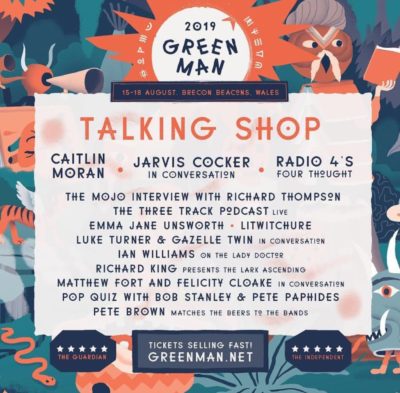