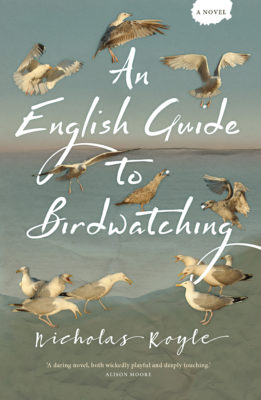 Short Stories Aloud presents an evening with Nicholas Royle (An English Guide to Birdwatching) and Alastair Reynolds (Elysium Fire). Listen to extracts from their novels, performed by professional actors.

Afterwards, Short Stories Aloud founder and host Sarah Franklin will be interviewing Nicholas and Alastair with a little help from the audience.

Nicholas Royle is Professor of English at the University of Sussex. As well as writing fiction, he has published numerous books about literature and literary criticism and theory including This Thing Called Literature (2015, co-authored with Andrew Bennett) and Introduction to Literature, Criticism and Theory (5th edition, 2016, co-authored with Andrew Bennett).

An English Guide to Birdwatching is his second novel. It combines a page-turning story about literary theft, adultery and ambition with a poetic and moving investigation into our relationship to birds and to the environment.

Alastair Reynolds studied at Newcastle and St Andrews Universities and has a Ph.D. in astronomy. He stopped working as an astrophysicist for the European Space Agency to become a full-time writer. ‘Revelation Space’ and ‘Pushing Ice’ were shortlisted for the Arthur C. Clarke Award, and four of his books have been shortlisted for the British Science Fiction Award while ‘Chasm City’ won the British Science Fiction Award.

Featuring Inspector Dreyfus – one of Alastair Reynolds’ most popular characters – ‘Elysium Fire’ is a fast paced Sci-Fi crime story, combining a futuristic setting with a gripping tale of technology, revolution and revenge.

This event will be held in the Norrington Room.