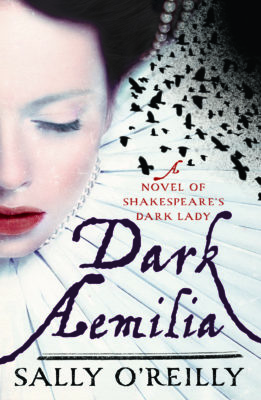 Come and celebrate the paperback publication of acclaimed historical novel Dark Aemilia by Sally O’Reilly in the fine surroundings of Hatchards Piccadilly on Tuesday 21 April. Join us to raise a glass to Dark Aemilia and hear Sally read from and discuss her remarkable novel with her publisher, Myriad Editions.

A must-read for fans of Tracy Chevalier and Sarah Dunant, Sally O’Reilly’s richly atmospheric novel compellingly re-imagines the struggles for power, recognition and survival in the brutal world of Elizabethan London. She conjures the art of England’s first professional female poet, Aemilia Lanyer, giving us a character for the ages – a woman who is ambitious and intelligent, true to herself and true to her heart.

Published in paperback to mark Shakespeare’s birthday on 23 April 2015, Dark Aemilia has already attracted widespread critical acclaim in the UK and the US. ‘We all know Shakespeare wrote love sonnets. Now, O’Reilly’s new novel brings us the Bard’s sonnet-writing lover and sonnet-inspiring muse,’ wrote the New York Post (Must Read Books). Meanwhile, author Susanna Jones said of it: ‘O’Reilly writes with a sharp wit and lightness of touch but tells a story that is dark, erotic and mysterious… For those readers of history who glimpse an intriguing woman in the shadows of men and ask, but what was it like for her, this novel is a treat.’

This is a free event; all are welcome. Refreshments will be provided. With thanks to Hatchards for hosting.