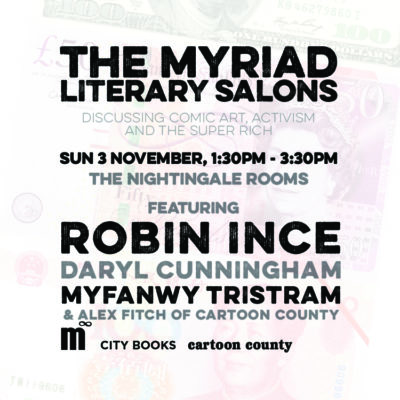 Come along and bear witness to Robin Ince conversing with Darryl Cunningham; meet co-hosts of Cartoon County (the Sussex Cartoon and Comic Strip Artists Association) and learn how (and when) they celebrate comic art right here in Brighton; be inspired as local comic artist Myfanwy Tristam shows how comics can create activists of us all.

Broadcaster, comedian and author of several titles including the most recent I’m a Joke and So Are You, Robin Ince is also known for co-presenting BBC Radio show The Infinite Monkey Cage, and the Utter Shambles podcast. Currently touring several shows, we decided to nab him and share his wonderful brain with Brighton.

Darryl Cunningham is the cartoonist/writer of Psychiatric Tales (Blank Slate 2010), Science Tales (Myriad Editions 2013), Supercrash: How to Hijack the Global Economy Graphic Science and now Billionaires, which looks at the super rich and the influence they have on our culture and politics.

Cartoon County co-founder Corinne Pearlman and current host and comics broadcaster Alex Fitch share the association’s mission to increase the appreciation of cartoons as an artform, to encourage the public in cartoon art and to show the quality and diversity of cartoon and comic strips artists, sharing details of their upcoming events.

Each salon features an emerging artist or author, and for this salon-with-a-twist we will feature Myfanwy Tristam and her Draw The Line, which sees artists together with a single aim: make the world a better place. Myf will tell us about the project and how you can get involved.

Tickets cost £8 and inc snacks. Drink will be available to purchase at the bar. City Books will be selling books by Darryl and Robin, with pre-publication copies of Billionaires also available.

And tell us if you’re going on Facebook HERE!