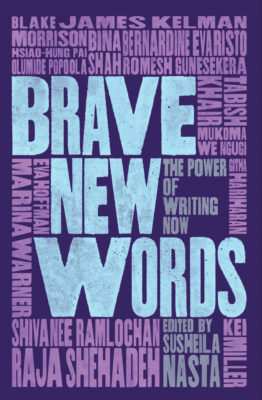 ONLINE EVENT
Wasafiri, the magazine of international contemporary writing, is celebrating its 35th anniversary with a special edition of the magazine and a new anthology. Join Wasafiri editors Susheila Nasta and Malachi McIntosh, along with writers Anthony Joseph and Winnie Li, for discussion and readings with Goldsmiths’ Writers Centre. There will be time for questions at the end of the event.
Literary activist, writer and presenter, Susheila Nasta is Professor of Contemporary and Modern Literatures at Queen Mary, University of London and Professor Emeritus at the Open University. She has published widely on postcolonial and contemporary writing, especially on the Caribbean, the South Asian diaspora and black Britain.
Brave New Words  features fifteen specially commissioned essays from distinguished authors explore the value of critical thinking, the power of the written word, and the resonance of literature in the twenty-first century. Each explores the crucial place of the writer, past and present. Their work articulates ‘brave new words’ at the heart of battles against limitations on fundamental rights of citizenship, the closure of national borders, fake news, and an increasing reluctance to engage with critical democratic debate. Edited by Susheila Nasta, Brave New Words is available to buy now.
This event will run from 5 – 6 pm on Zoom and will be free for all to attend. Please register in advance here.