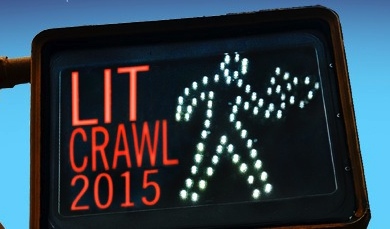 Crawl the streets of Peckham and get intoxicated on literature (as well as your lubricant of choice). Lit Crawl London, in partnership with the Literary Kitchen Festival, invites you to choose your own path through a series of events held right across the neighbourhood. We’ll be taking over pubs, bookshops, an arcade bar, a pool club and coffee shops to bring readers and writers together. Free events, a relaxed atmosphere and an eclectic selection of poetry, art and fiction make the Crawl a melting pot for book lovers and anyone drawn to the pleasures of the unexpected.

Emily Bullock won the Bristol Short Story Prize with her story ‘My Girl’, which was also broadcast on BBC Radio 4. Her work has also been shortlisted for the Fish International Publishing Prize and longlisted for the Bath Short Story Prize. She has an MA in Creative Writing from the University of East Anglia and completed her PhD at the Open University, where she also teaches Creative Writing. Her debut novel, The Longest Fight, was published by Myriad in February.

S.E. Craythorne lives and works in rural Norfolk. She holds an MA in Creative Writing from the University of East Anglia. Her poetry and prose have been published in various literary journals. How You See Me is her debut novel and was published by Myriad this August.

Sara Marshall-Ball worked as a proofreader of gravestones to support herself through her MA in Creative and Critical Writing at the University of Sussex. During this time she wrote much of her debut novel Hush. The novel was shortlisted for Myriad’s Writer’s Retreat Competition in 2012 and was published in June this year.

For the full programme visit the Lit Crawl website.