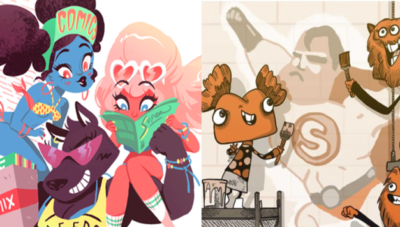 Once again, Myriad will be taking a stand at the premier comics fair in Northern England – the annual Thought Bubble Leeds Comic Arts Festival.

Come and visit our table in New Dock Hall, and get the latest offers on Myriad graphic novels, plus a chance to get signed copies from our very own Yorkshire locals: Darryl Cunningham – whose latest book, Supercrash, is shortlisted for the British Comic Awards Best Book – and Una, whose debut graphic memoir, Becoming Unbecoming, has just been published. Also at the Festival will be Gareth Brookes, winner of the inaugural Myriad First Graphic Novel Competition with The Black Project. Catch Nicola Streeten in action, too, whose graphic memoir, Billy Me & You, was the first to be created by a British woman.

A great place to catch up with your favourite creators, and see what’s new in the world of comics.