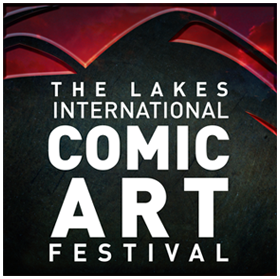 Myriad will once again be exhibiting at the Comics Clock Tower over the festival weekend, so do come and check out our wonderful new title Becoming Unbecoming by Una, and seize the chance to have our award-winning authors Gareth Brookes, Darryl Cunningham and Ian Williams sign your very own copies of their best-selling graphic novels, including Gareth’s The Black Project, Darryl’s Science Tales and Supercrash, shortlisted for the British Comic Awards Best Book, the AOI World Illustration Awards and for the British Book Design and Production Awards, and Ian’s The Bad Doctor, highly commended by the British Medical Association and shortlisted for the Medicine Unboxed Creative Prize. Festival guest Jade Sarson, winner of the 2014 Myriad First Graphic Novel Competition, is one of  six creators who will be up all night as part of the 24-hour Comics Marathon Team, producing her own comic in 24 hours or less. Jade’s graphic novel For the Love of God, Marie! will be published by Myriad in 2016. So see her creation at the grand unveiling on Sunday. For more information and tickets, visit the festival website.