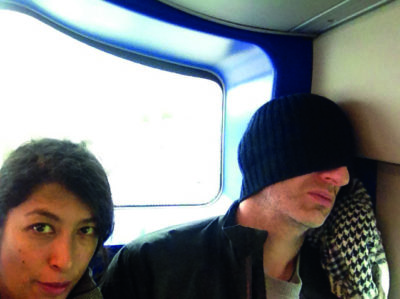 The festival kicks off with fiction from four of the UK’s foremost practitioners, Natasha Soobramanien and Luke Williams, Jonathan Gibbs and The Goldsmiths Prize 2014 shortlisted Will Eaves.

Natasha Soobramanien and Luke Williams, authors of first novels Genie and Paul and The Echo Chamber, read from their collaborative second novel, Diego Garcia. Jonathan Gibbs reads from his debut novel, Randall.  Will Eaves reads from his most recent publication, The Absent Therapist, described by author Patricia Duncker as ‘a book of soundings, a jostle of voices that variously argue, remember, explain, justify, speculate and meander’.

Natasha and Luke have been working together since they met at the University of East Anglia, where they studied creative writing with W. G. Sebald. They are the authors of the first novels Genie and Paul (Myriad, 2012), which featured in the Guardian‘s Books of The Year, and The Echo Chamber (Hamish Hamilton, 2011), which won The Saltire Society’s prize for Scottish First Book of The Year. They are now collaborating on a second novel, Diego Garcia, to be published in instalments. Chapter 1, ‘Debt’, appeared in Issue 12 of The White Review. Natasha lives in Brussels, Luke lives in London.

Jonathan Gibbs was born in 1972 and lives in London. His debut novel, Randall, is published by Galley Beggar Press, and was longlisted for the Desmond Elliott Prize. His short fiction has appeared in Lighthouse, The South Circular and Gorse, has been anthologised in #1 Short Story Anthology (Vanguard), Allnighter (Pulp Faction) and The Best British Short Stories 2014 & 2015 (Salt), and was shortlisted for the inaugural The White Review Short Story Prize. He blogs at tinycamels.wordpress.com.

Will Eaves has written four novels and one book of poetry. His most recent publication, The Absent Therapist, from which he will read at the festival, was shortlisted for The Goldsmiths Prize in 2014. For many years he was the Arts Editor of the TLS. He now teaches at the University of Warwick.