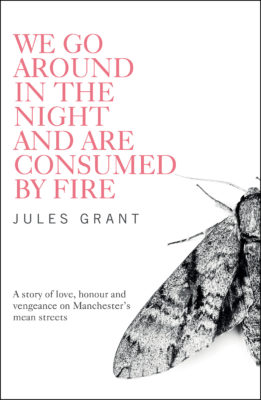 Jules Grant, author of the most original crime novel soon to hit shelves (April 28) – it’s LGBT, it’s street poetry, it’s Manchester-noir, it’s We Go Around In The Night And Are Consumed By Fire –  will be at Paul Burston’s famed Polari Literary Salon.

The New York Times fancy it ‘London’s most theatrical salon’, and those at the Huffington Post say it’s ‘the most exciting literary event in London… crackling with energy, ideas, excitement.’

It’ll be taking place between Soho and Covent Garden in the Light Lounge, a sprauncy little bar befitting the salon’s theatricality with its bespoke cocktails and backing tracks of disco, funk, and soul.

Jules will be reading from her book – indeed, we strongly recommend you hear the words coming from her mouth; it’s a novel influenced heavily by British spoken word and the poetics of the street – and will take part in a Q&A with Paul. Books will be available for purchase and for signing too. Come and mingle.