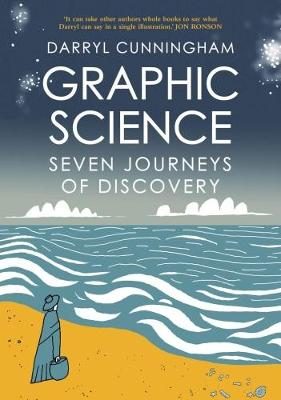 Much is known about scientists such as Darwin, Newton, and Einstein, but what about lesser known scientists – people who have not achieved a high level of fame, but who have contributed greatly to human knowledge? What were their lives like? What were their struggles, aims, successes, and failures? How do their discoveries fit into the bigger picture of science as a whole?

“This is not just mind-blowing, complex scientific discovery made accessible, but made absolutely riveting. Daryl Cunningham brings to life the lives and often troubled and tortuous circumstances of those who have made some of the greatest scientific discoveries in history. His graphic narrative style is unparalleled – as with all his books, he breaths fire and soul into the big ideas that dominate human understanding.” – Jamie Kelsey-Fry

Darryl’s candidtaes include Antoine Lavoisier, the father of French chemistry who found himself on the wrong side of a revolution and paid the price with his life; Mary Anning, a working-class woman who made her living fossil-hunting along the beach cliffs of southern England; George Washington Carver, who was born a slave and became one of the most prominent botanists of his time; Alfred Wegener, a German meteorologist, balloonist, and arctic explorer whose theory of continental drift was derided; Nikola Tesla, a Serbian American inventor, and competitor of Edison; Joyce Bell Burnell, Northern Irish astrophysicist whose supervisor accepted the Nobel Prize in physics while she was excluded; and Fred Hoyle, an English astronomer whose eccentricity contributed to him to being overlooked by the Nobel Prize committee for his stellar nucleosynthesis work.

He will be joined in conversation by acclaimed graphic author, Hannah Berry.