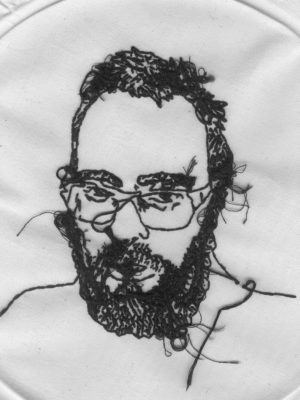 Take part in a comic and graphic novel workshop with Gareth Brookes at WORDfest Crawley 2020.

Gareth Brookes studied printmaking at the Royal College of Art. Known for an unusual approach to materials, which include, embroidery, linocut, monoprint, pressed flowers and pyrography, he has published two graphic novels with Myriad Editions. The first of these, The Black Project, won the Myriad First Graphic Novel Competition in 2012, was featured in  the ‘Comics Unmasked, Art and Anarchy in the UK’ exhibition at the British Library, London and was nominated in the Sélection Officielle at the 2018 Festival de la Bande Dessinée in Angoulême.

Gareth has produced a number of self-published books, including The Land of My Heart Chokes on Its Abundance. His work is also published by collectives such as The Alternative Press and The Comix Reader, while his two-comic collaboration with artist Steve Tillotson, Manly Boys and Comely Girls, is available from Avery Hill Publishing. Gareth’s second graphic novel, A Thousand Coloured Castles, was published by Myriad in April 2017.

Gareth is a visiting lecturer at Wimbledon School of Art, the University of York St Johns, Staffordshire University and The Royal College of Art.