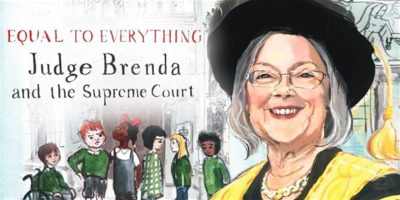 Artist Henny Beaumont and Afua Hirsh have worked alongside the Legal Action Group to create Equal to Everything: Judge Brenda and the Supreme Court; an illustrated book for children.

The book, illustrated by Henny and written in verse by Afua, introduces children to the legal system, justice and equality. A selection of original artwork by Henny created for the book can be viewed at The Supreme Court until June 2020.

Henny Beaumont is a graphic novelist, freelance illustrator and political cartoonist. Her first graphic novel Hole in the Heart was shortlisted for Myriad first Graphic novel prize and
included in list of top ten books about motherhood of all time by Mumsnet. Her political cartoons and animations have appeared in the Canary and The Morning Star as well many as other publications.

Afua Hirsch is a Norwegian-born, British writer, broadcaster, and former barrister. She has worked as a journalist for The Guardian, and was the Social Affairs and Education Editor for Sky News from 2014 until 2017. She is one of the contributors to Margaret Busby’s anthology of African women writers, New Daughters of Africa.

The exhibition is free to attend.