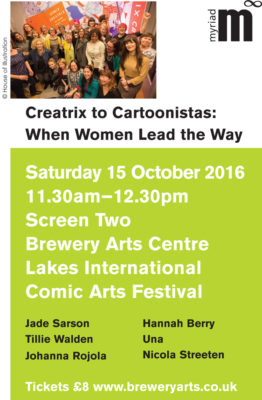 ‘While Angoulême grapples with the concept of the 21st century, may I recommend @comicartfest? Same organising principle, none of the WTF.’ @AlexPaknadel

Women direct comics festivals and independent graphic novel publishers, head comic museums, work as comics academics, and feature equally with men both as creators and readers in the independent comics scene. The most proactive comics network in the UK is Laydeez Do Comics, and there are more women taking on lead roles in mainstream comics publishing, so is there any need to shout out about what women do? Or should women make a platform for others to be heard? As Rosa Luxemburg said: ‘The most revolutionary thing one can do is always to proclaim loudly what is happening.’

Join Myriad authors Nicola Streeten, Una and Jade Sarson discussing what it’s like to be in the vanguard along with Tillie Walden, Hannah Berry and Finnish ‘comics laureate’ Johanna Rojola.