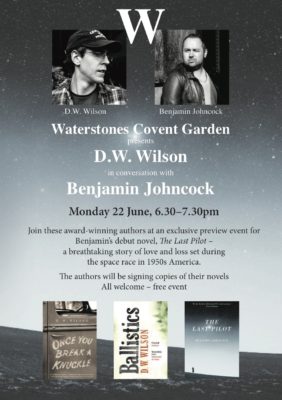 Join these award-winning authors at an exclusive preview event for Benjamin Johncock’s debut novel, The Last Pilot – a breathtaking story of love and loss set during the space race in 1950s America.

With echoes of Raymond Carver as well as Tom Wolfe’s The Right Stuff and Richard Yates’ Revolutionary Road, The Last Pilot re-ignites the thrill and excitement of the space race through the story of one man’s courage in the face of unthinkable loss.

During the event, Benjamin Johncock will discuss The Last Pilot with D.W. Wilson, author of Ballistics and Once You Break A Knuckle. Both authors will be signing copies of their novels.

Published in July 2015 by Myriad, D.W. Wilson says of The Last Pilot ‘The writing is machine-cut and spare. Johncock has dared to reach for the stars.’

Free event; all are welcome.