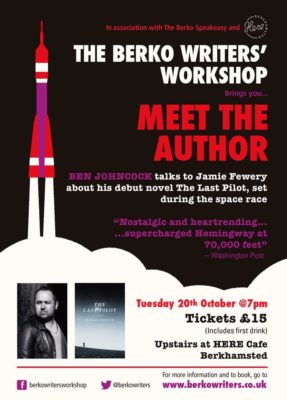 Benjamin Johncock will be in conversation with Jamie Fewery, discussing his debut novel, The Last Pilot – set in America against the backdrop of the space race.

Benjamin Johncock’s debut, The Last Pilot, was published by Myriad in July and has impressed critics and readers on both sides of the Atlantic. With echoes of Tom Wolfe’s The Right Stuff and Richard Yates’ Revolutionary Road, it re-ignites the thrill and excitement of the space race through the story of one man’s courage in the face of unthinkable loss. The Spectator described it as ‘a first-rate novel by a major new talent’ and the Washington Post  called it ‘nostalgic and heart-rending’.

At this event Benjamin joins the Berko Writers’ Workshop to give readings from his work and discuss his inspirations.