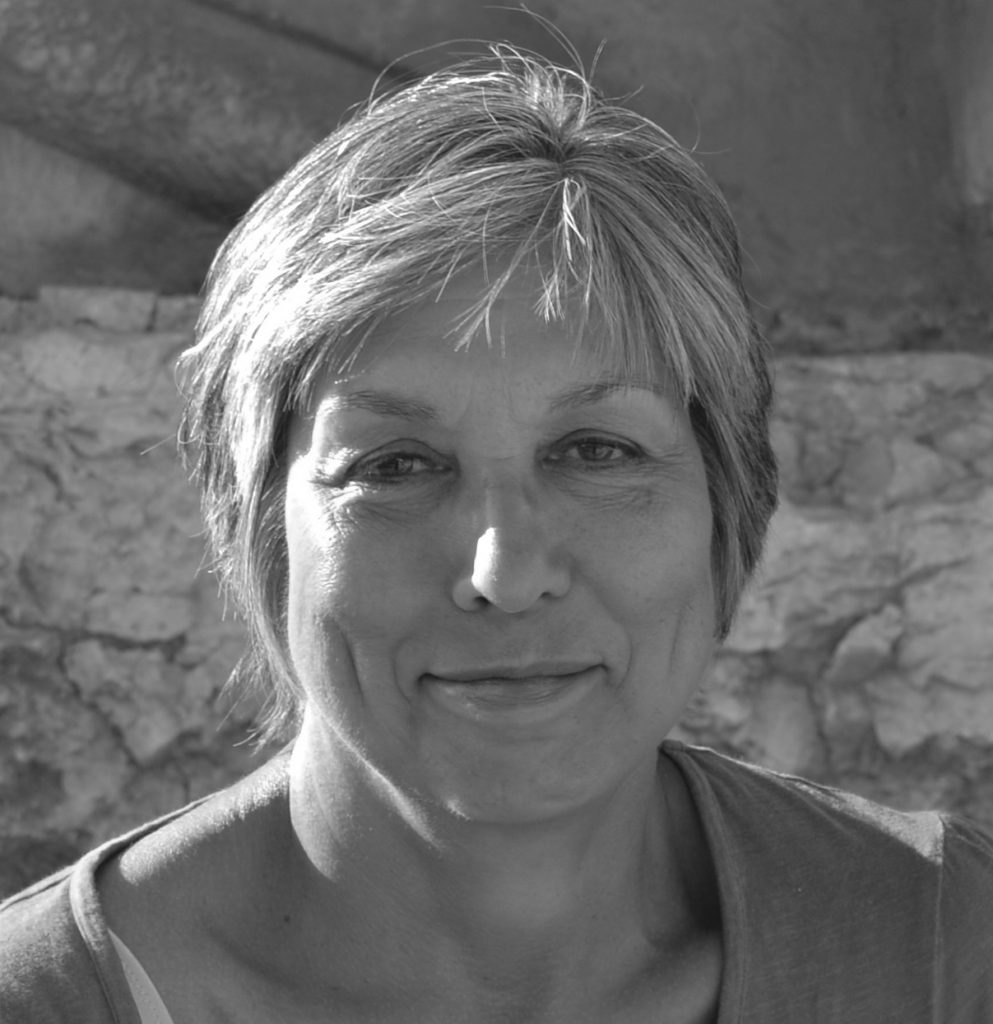 When I finished Belonging I thought I was done with that history and those characters, but three years on I find myself working on a novel set during the British Raj, this time about an Indian soldier on the run in Italy during the Second World War, and then back in India as the country begins to prepare for Independence. As part of my research I have just completed two trips to Italy, thanks to a generous grant from The Society of Authors.

My first visit, in late July, was to Monte Cassino, the site of four major battles that took place over a period of four months between January and May 1944. Troops from Canada, India, Nepal, New Zealand and Poland fought alongside British soldiers in the 8th Army, in a campaign that cost some 55,000 Allied casualties. Just a look at the terrain—a series of mountains and rivers fiercely defended by the German army, which held all the high ground—explains the almost impossible task that confronted these soldiers. Historians have described the Italian campaign as one of the most hard fought and challenging of the entire war, with conditions in many cases worse than those of the First World War, but after D-Day media attention shifted to France and Germany and the Italian campaign was forgotten. In the House of Commons Nancy Astor contemptuously referred to the soldiers in Italy as ‘The D-Day Dodgers’. Their response was a song, ironically embracing the sobriquet, which can be heard here. 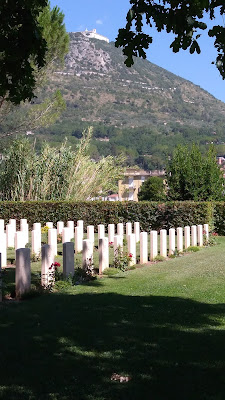 The Allied advance and associated bombing devastated great swathes of Italy, destroying whole towns, turning farmland into battlefields and creating hundreds of thousands of refugees. After the surrender of Italy in September 1943, with their men away fighting as Partisans or with the Allies, or working as slave labour in German POW camps, thousands of women had to turn to prostitution to feed their families. Despite the terrible suffering experienced by the civilian population, many escaped Allied POWs and Jews were sheltered by Italian families who risked their lives and shared their meagre food and supplies at a time when most of the population was starving. Italian guides helped Allied POW escapees through the mountains, risking instant execution and reprisals against their families. Just as the soldiers in Italy were effectively branded cowards by the epithet attached to them, the extraordinary courage and compassion shown by ordinary Italian people went unacknowledged after the war. Our guide, Danila Bracaglia of Monte Cassino Tours, showed us round the Monastery and the area, gave us the cultural and historical background and introduced us to Italians who had childhood memories of the German occupation. Everywhere we went we were welcomed warmly, as though we were long lost family.

At San Angelo, the site of a ferocious battle in which the Indians were involved, Angelo Evangelista (left) told me how, as a boy, when German soldiers occupied the village, he had swapped eggs for bread with them. One soldier cheated him and was disciplined by his senior officer when the boy complained, and the soldier later threw a rock at him. Deserters from the Italian army were hidden in basements although the penalty was death, but when the villagers were lined up one man said he would rather be shot than betray his friends and the Germans let them all  go. ‘They weren’t bad people,’ Angelo said. ‘They weren’t SS or Gestapo. Just ordinary soldiers.’

At Sinagoga, an ancient Jewish settlement which was cleared of Jews in the 14th century, Franco Sinagoga (right) showed us the barns that were occupied by German troops and described the tunnels dug under them in which they hid their anti-aircraft guns, so they could roll them out to fire and then withdraw. He and his wife, whom we woke from their siesta, made us welcome and plied us with food, beer and strong spirits. In mid-afternoon temperatures of 38 degrees, we refused politely and opted for iced water, but I started to get a sense of the welcome that escapees and refugees have described receiving.The warmth and hospitality reminded me of India and I saw many similarities between the Indian and Italian ways of life. Most Indian soldiers, like Italian ones, came from agricultural families. They understood the poverty and harshness of rural life, but also the deep connection between the people and the land they had lived on for centuries, and were able to empathise with their suffering in a way that many other soldiers could not. Even the divisions in Italian society between the fascists and anti-fascists would soon be reflected in India in the inter-communal conflict at Partition.By the end of that tour, I had a sense of the Italian landscape, the people and the culture, essential if I am to believe in the world of my novel. But I still needed an understanding of the Indian Army’s involvement, what a soldier would have experienced on the ground, the conditions, and of course some specifics about battles, weaponry, and so on. 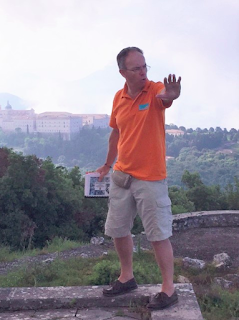 In searching the internet for leads to particular regiments and where they fought, I stumbled across a posting by Sue Hughes about her father who was a British officer with the 3/8 Punjabis. She in turn recommended cassinobattlefields. co.uk, run by retired Lt-Col. Frank de Planta (left). Frank told me he was taking a group of thirty-five soldiers from a Scottish armoured regiment to Monte Cassino and asked if I would like to join them. Somewhat apprehensively, I agreed.

I arrived at Rome airport and met Frank and a group of fit young men and women, accompanied by  a few older officers. My apprehensions evaporated as the older officers immediately welcomed me. It took a little longer to break the ice with the soldiers, who, understandably, came from different places in Scotland and Northern Ireland and were more comfortable in their own tightly knit groups. One of the things that became apparent to me quite quickly is the loyalty that is built up within a group of soldiers who have been in combat together. Nevertheless, many of them went out of their way to talk to me and make me feel included.

The tour was arranged like a military operation. Breakfast was at 7.30 every morning and by eight we were out in the coach, being taken to different places and talked through the military planning, its implementation and then how it played out in reality, aided by an impressive pack handed out to each of us, containing maps, battle plans, photographs taken at the time, lists of equipment, and other useful information.

One of the things that became clear early in the tour is how much battles are influenced, not just by the practicalities, but by the political manoeuvring of the various nations involved, by the personal egos of the higher ranks, by miscalculation and outright stupidity (Frank’s language became very colourful at these points) and how the price for all these things is paid for with the lives and suffering of the soldiers on the ground. Hearing about this in the presence of soldiers who have been in Afghanistan and Iraq, seeing them nod in recognition, and realising that they have few illusions about war, made me wonder more than ever what motivates people to join the army, but this was a question I didn’t feel able to ask. What I did see clearly, and the reason why I think I write about war, is the remarkable ability of people to subsume themselves in the cause of something greater than themselves, and the extraordinary intimacy fostered by facing danger together.

But there is also the human cost of it. At dinner one evening I was sitting next to a soldier who seemed one of the most relaxed and friendly around me, and the conversation led to him telling me about a time in Afghanistan when a friend of his was shot in the neck. ‘I was trying to find the exit wound, but I just couldn’t find it. I was covered in blood and so was he, and I was panicking. In the end I said to him that if he wasn’t in a huge amount of pain it must just be a flesh wound. But when I got back to the base I did this.’ He pulled up the leg of his shorts and pointed to his knee and showed me a smiley face that he had made with a cigarette, ‘… because sometimes you just have to have a laugh, don’t you?’

This is an edited extract from Umi Sinha’s blog.