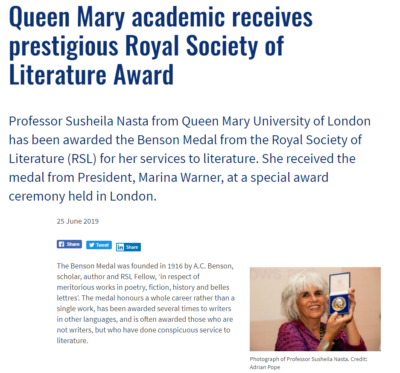 Professor Susheila Nasta from Queen Mary University of London and editor of Brave New Words has been awarded the Benson Medal from the Royal Society of Literature (RSL) for her services to literature. She received the medal from President, Marina Warner, at a special award ceremony held in London.

The Benson Medal was founded in 1916 by A.C. Benson, scholar, author and RSL Fellow, ‘in respect of meritorious works in poetry, fiction, history and belles lettres’. The medal honours a whole career rather than a single work, has been awarded several times to writers in other languages, and is often awarded those who are not writers, but who have done conspicuous service to literature.

In addition to being the sole recipient of the 2019 Benson Medal, Professor Nasta was also elected as an Honorary Fellow at the Royal Society of Literature (RSL).

“I am so proud to have been selected as the recipient of the Medal and as an Honorary Fellow. Both are huge honours, especially as this recognition comes from my peers,” said Professor Nasta.

“I am delighted too that over the past 35 years Wasafiri has been able to build an international community and nourish the work of so many distinguished writers from around the world,” she added.