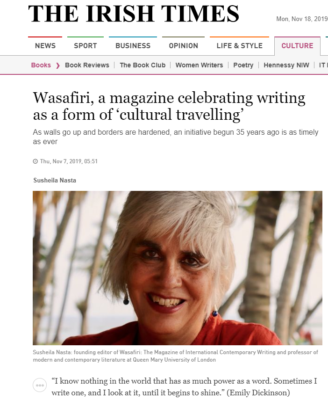 Susheila Nasta’s introduction to Brave New Words ran in The Irish Times, alongside a feature on the recent British Library festival; An Island Full of Voices: Writing Britain Now.

‘Today, the role of writers and of literature in asking questions and creating dialogues across often impassable barriers of prejudice and thought is not only vital but perhaps more urgent than ever. As wordsmiths, whose craft uses the very same instruments through which political power is most commonly exercised, writers and politicians may well as Salman Rushdie once put it be, “natural rivals”. Not only do they “create fictions” but also they make the world as they want to see it. As their words frequently complicate, challenge or deny “official” versions of truth, giving the lie to “official facts”, they are often, as Rushdie himself knew well, on dangerous ground.’