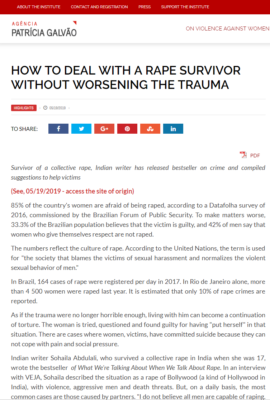 ‘In an interview with VEJA, Sohaila Abdulali described the situation as a rape of Bollywood (a kind of Hollywood in India), with violence, aggressive men and death threats. But, on a daily basis, the most common cases are those caused by partners. “I do not believe all men are capable of raping. For soldiers, who use abuse as a war crime, it can be part of a function. In a relationship, it can be part of the dynamic, the will to have sex. What I know is that it’s a choice. It is not something natural, it is not something that men can not avoid, as if it were a biological impulse. They can avoid yes. They can control themselves, ” she said.’