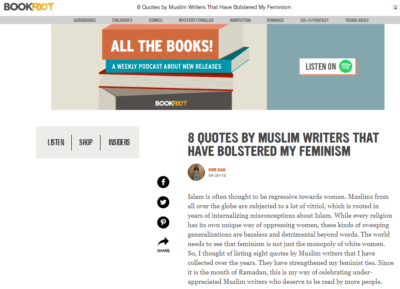 Dee Dag shares 8 feminist quotes by Muslim writers which she has collected over the years  for Book Riot. She includes an extract of What We Talk About When We Talk About Rape by Sohaila Abdulali.

“Who gets raped? Who do we think gets raped? Are girls who can shit and vomit on command immune? What about sex workers? Even if we acknowledge that anyone can be raped, who deserves to be raped? When are we willing to call it rape? At what point do you lose sympathy of your peers? When you’ve drunk too much, when you’ve had sex with x number of men in the past, when you’re just not a nice person? … Maybe acknowledging that all sorts of women get raped by all sorts of men messes too much with the comfortable narrative that says only good girls get raped. Oh, but it also says good girls don’t get raped. Both these things can’t be true, and sex workers aren’t good girls, so how can they be raped, and if they’re raped, they’re human and hurt, and we can’t have that. So let’s just shut our eyes and maybe the whole confusing thing will go away.”