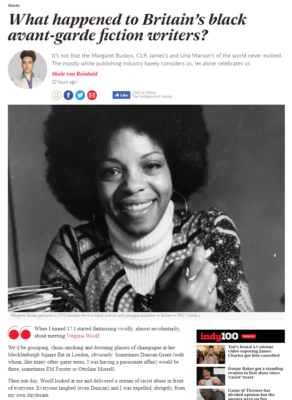 ‘Why did it take me so long to learn of Margaret Busby, who became the first black woman and youngest publisher in Britain, and whose recent New Daughters of Africa shows black women writers in Britain well before the arrival of the Windrush generation.’

Shola von Reinhold discusses the black writers and creatives who existed in the artistic folds of Britain but whose history wasn’t shared alongside more well-known artists because of the colour of their skin. Shola explores the role Margaret played as the first black woman publisher in Britain, whilst also highlighting other publishers and artists working to promote and celebrate black authors and artists in Britain today. Read the article in full over on the Independent website.