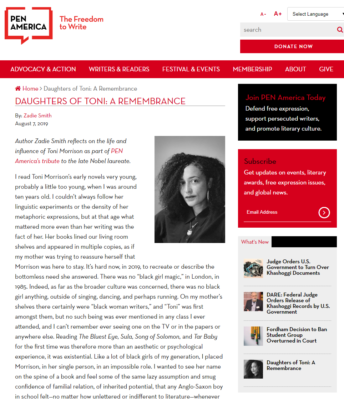 Author Zadie Smith, contributor to New Daughters of Africa, reflects on the life and influence of Toni Morrison as part of PEN America’s tribute to the late Nobel laureate.

‘In 1992, my mother’s close friend, the Ghanaian born, legendary Black-British publisher Margaret Busby, published the first volume of Daughters of Africa, in which Morrison was of course included, alongside more than two hundred contributors. Its title came from the words of Maria W. Stewart, the first African-American woman to give public lectures: “O, ye daughters of Africa, awake! awake! arise! no longer sleep nor slumber, but distinguish yourselves. Show forth to the world that ye are endowed with noble and exalted faculties.” A year after that, Morrison won the Nobel Prize. A year after that, I went to university to embark on a course of English Literature which included not a single daughter of Africa nor any sons either. Change was a long time coming, but Morrison stayed out front, leading us into the future, like a pilot light.’