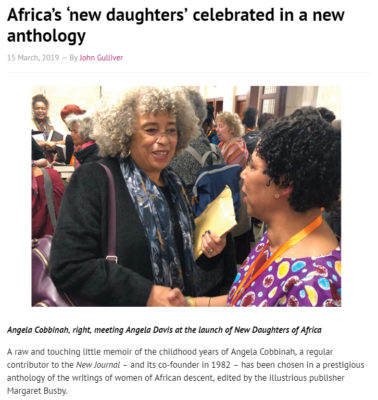 Camden New Journal reported from the SOAS launch for New Daughters of Africa.‘

‘A raw and touching little memoir of the childhood years of Angela Cobbinah, a regular contributor to the New Journal – and its co-founder in 1982 – has been chosen in a prestigious anthology of the writings of women of African descent, edited by the illustrious publisher Margaret Busby.’

‘It tells of her early years – often puzzling and painful – as the only black child in a Cornish village where she lived with her mother, a Hungarian refugee who had become the local midwife – her father had returned to his native country, Ghana.’

‘Her name sits among such household literary names as Zadie Smith, Chimamanda Adichie, Andrea Levy and Marion Blackman but also many unknowns. Typical of Angela’s writings, her 3,000-word memoir displays a candour and insight­fulness that beautifully illustrates a maturing mind caught up in an atmosphere of prejudice and ignorance.’