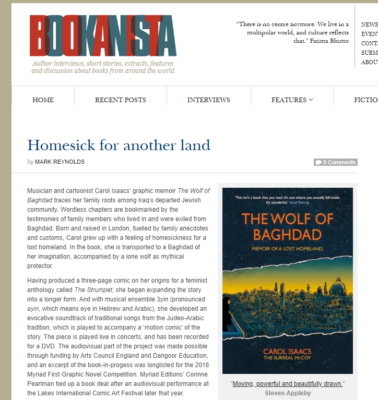 “I’ve got nothing to visit, really,” she tells me. “There’s no house, there’s no cemetery. Saddam Hussein bulldozed the major Jewish cemetery to build a highway in the 80s, so my grandparents’ grave will have gone, there’s nothing there. Some houses in the old Jewish Quarter are still standing, but in terrible disrepair. So I wouldn’t have anything tangible to go back to, but it would be more about a connection, returning the story back to its roots. And there is interest from some Iraqis, it would seem, about the history of their minorities. I’m not sure if now is the right time to go, again there’s a lot of upheaval and violence, but I do hope one day I will. My mother’s generation, her siblings, would say, what would we go back for? We were thrown out, we were ethnically cleansed from that country. The older ones who are no longer with us would say, ‘Well we enjoyed the good times, we got on with our neighbours and everything.’ A friend of my mother has gone back, and actually purchased a house in Erbil in Kurdistan. It’s more of a symbolic thing, but he travels quite a lot from here to Iraq. So I don’t know, time will tell on that one.”

Read the full interview HERE. Carol’s graphic memoir, The Wolf of Baghad, is out now.